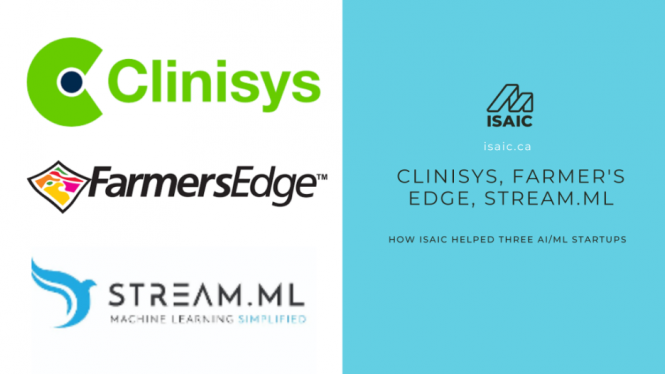 ISAIC proudly provides computational resources and infrastructure to drive adoption and commercialization of AI in Western Canada. Some of the benefits to using these resources and infrastructure include affordability, accessibility, and ease of use. Through a series of case studies, find out how ISAIC has helped businesses solve real-world problems and accelerate the use of AI.

Clinisys EMR launched in 2012 and provides software products to the market including EMR and disease registries. As a result of their data centric applications, Clinisys evolved into a data analytics company, specializing in analytics of health data.

One issue Clinisys found was that they required infrastructure to deal with the large amount of data and for their more sophisticated domains like AI. As a relatively small company, Clinisys found they didn’t have the capacity to spend large sums on equipment for projects, especially when they didn’t know if they would be going to the market. This made investment an issue for the company. Another issue was accessibility and resources. It was difficult to hire talent and expertise for their purposes strictly through posting online positions.

As a smaller company, ISAIC provided Clinisys with the opportunity to access resources as they continue to grow. ISAIC is also housed at the University of Alberta which gave the company access to talent and to build academic relationships with students. This also allowed Clinisys to leverage resources at the University and work on collaborative projects with those experienced with applied ML.

As a result of ISAIC’s fast computing resources, Clinisys has been able to take on more projects than they believed would be possible and continue to take on more because of the high performing resources. More specifically, Clinisys used to take on one project and it would take 2 years to complete whereas with ISAIC’s help, they had 3 projects completed in the span of a year. ISAIC also helped fill in the blanks for AI that they were unfamiliar with, particularly EMR. Clinisys was then able to leverage the information for more solutions with their analytics AI/ML side developing from 0 to 50% of their business/product line.

Thanks to the resources, expertise, and connections made available through ISAIC, Clinisys has been able to grow by taking on more projects and expanding their clientele and business.

Farmers Edge was started in 2005 with a focus on Precision agronomy services. These services allow for fertilizer to be applied less wherever it is needed the least, to optimize business. Over the years, Farmers Edge has expanded to data drive analytics, predicting crop fields, satellite imagery and more. Farmers Edge requires large computing and storage resources to handle their impagery and projects.

Previously, Farmers edge was using a big name cloud provider at a significant cost. The pricing model was multi-tiered where customers could pay a premium to get dedicated access on demand, or pay a discount rate to use the resources that may or may be available when you need them. Farmers Edge needed high performing computing and storage resources for projects, but found their current cloud provider’s pricing model wasn’t what they were looking for and that the onboarding process was too complex.

ISAIC’s laddered pricing allows clients to build a pricing plan that best fits your specific computational needs and available resources. ISAIC also has a dedicated VM on Demand service that allowed Farmers Edge to access it anytime they needed it. The onboarding process at ISAIC allows for simple access to powerful machines but as an extension of your own desktop. Farmers Edge found this a much simpler process than their experience with other big cloud providers.

The primary value that Farmers Edge found through using ISAIC’s services was the cost savings and the dedicated and accessible machines. They also found ISAIC helped break through common barriers of using AI through the simplicity of testing and using the readily available resources. These resources allowed for Farmers Edge to run many experiments and test out new projects with ease and affordability they didn’t previously have access to, saving them hundreds, if not thousands of dollars, as well as valuable time and labor. For a three-month project, weeks were saved and the company estimates the project took 20% less time than previous attempts.  These savings and resources contributed to valuable sales and business partnerships.

Stream.ML enables anyone to leverage machine learning by making it easy to build ML models in minutes. This happens by taking pictures and uploading the images that will then train the models to recognize patterns, creating custom machine learning models. They perform automated machine learning to automate the process of applying machine learning to real-world problems. Stream.ML previously had their own computing infrastructure to train models but found it was slow and expensive to both buy and run.

When searching for high-performance computational resources, the company found it hard to find options and that many of the available ones were too expensive. Since the company performs autoML, Stream.ML must perform countless experiments to determine what is capable of being automated. This requires large amounts of computation power and large consumption of CPU and GPU resources. They needed a way to compute large amounts to maximize their efficiency without spending most of their cash on testing.

Through ISAIC’s resources, Stream.ML could easily run their experiments and train multiple autoML models while testing their performance in a timely manner. This reduced idle time and utilized their data scientists by running tests through ISAIC’s computers. This freed up time and allowed their data scientists to find results quicker and enabled faster decision-making as they no longer needed to make assumptions that they needed in a timely fashion.

Stream.ML found value in using ISAIC’s resources as it advanced their ability to perform research and development while ensuring they could better utilize their data scientist’s time. They also more easily reached their business objectives through ISAIC’s easy-to-use and readily available resources. Overall, Stream.ML opened more avenues for income for themselves and their clients by using ISAIC’s infrastructure to build models faster and more efficiently.